Pepper&Carrot Fate Accelerated RPG is a role playing game set in the universe of Hereva where Pepper and Carrot live. This game will allow you to explore the world of Pepper&Carrot and play a variety of characters from the comics written and illustrated by David Revoy.

What you'll need to play?

The Pepper&Carrot RPG is designed for 3--5 players, one of whom will play as the Game Moderator (or GM). The GM is responsible for describing the world and events of Hereva to the players. They also take the role of any characters that the players might encounter in this world. We'll have more details about what it means to be a GM later on in this book.

You'll also need four Fate or Fudge dice.  These dice are six-sided dice with two Plus sign faces, two Minus sign faces, and two blank faces. You can find these online or at finer hobby game stores for purchase. You can also make them yourself via several methods (either with a blank die, or with some clever marking of a six sided die). Check the appendix for more details about Fate or Fudge Dice. You may also use The Deck of Fate in place of, or in addition to, dice. Each player should preferably have their own set of dice or cards.

How can you help?

1) Does the magic system fit the world described? Magic in Hereva is plentiful, and is essentially our Physics. It is cheap but requires Rea, which is the effort into making a spell work. I wanted to reflect that in the magic system, so I'm hoping that came across.

2) Do the Stunts make sense for the world described?

3) What else should be added in the core book? I'm hoping to create a book that folks who are familiar and unfamiliar with both Pepper&Carrot and Fate Accelerated can pick up and play. There's obvious issues with the layout and issues with the ordering of chapters, and missing content related to creatures and what to do once in this world, but with this scaffolding in place what more would you like to explore in this world?

The layout and template files are based on the Nip'ajin Roleplaying Game written by Ludus Leonis,. Layout and templates are released under a Creative Commons Attribution 4.0, CC-BY license for our use. Used under this license with kind permission.

Authors of all editions or contributions to this project accept to release their work under the license: Creative Commons Attribution 4.0 International , CC-BY . All resources here (images/sounds/videos) are under the same license. 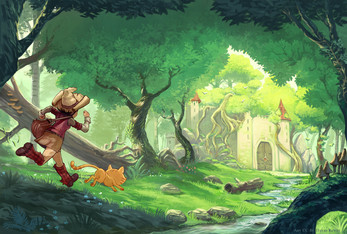